The Cambridge Morris Men, as one of the most historic revival sides in the country and founder members of The Morris Ring has, unsuprisingly has some illustrious alumni 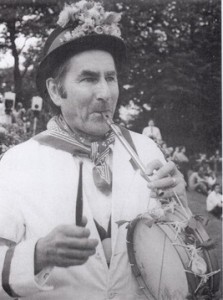 Russell served terms as Squire and Bagman of Cambridge Morris Men as well as being the third Bagman of The Morris Ring 1950-1959. Russell had a deep love of music, he played the cello was an unquestioned master of the Pipe and tabor.
Lionel Bacon (1910 –  ? ) 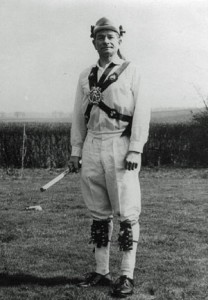 Lionel Bacon was born in 1910 and in 1929 went up to Trinity College, Cambridge where he read medicine.  He became a keen morris dancer and was admitted to the Cambridge Morris Men in 1932.  Whilst with that club, known when touring as the Travelling Morrice, he had the opportunity of meeting, and unusually for that period, of filming both traditional dancers and the revival of the inter-war years.Lionel is chiefly remembered in the morris world for his seminal work  “A Handbook of Morris Dances” which he described as an aide memoire, rather than a morris dancing primer.
Arthur Peck (? – 1974) 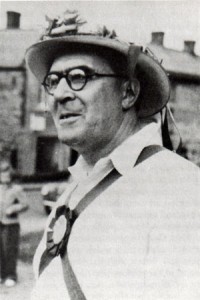